In 1994 Dr. Boswell became the first private veterinary practitioner in the state of Florida to hold a license to handle radiopharmaceutical for medical imaging. Thus began his career in equine nuclear imaging, also known as scintigraphy or bone scanning. When faced with a lame horse, diagnosing the area responsible for the lameness is at least 75% of the battle. Some lamenesses are not obvious; they may not block sound, multiple limbs may be involved, or the horse may be too fractious to safely perform nerve blocks. This is where nuclear scintigraphy comes into play. It is a physiological imaging technique that “sees” abnormal bone cell metabolism due to injury, infection or degenerative diseases. In a nutshell it works like this; the patient is injected with a radioisotope, technetium-99m (tc-99m), which becomes temporarily incorporated into bone cells. Areas of bone with increased/abnormal remodeling will concentrate the tc-99m. The tc-99m decays by releasing gamma radiation and has a short half life of only six hours.

MRI or magnetic resonance imaging is the gold standard in non invasive diagnostic imaging in both human and veterinary medicine. Until recently it was limited in equine practice to a few universities and large private practices. Today however, smaller, less expensive, low field strength magnets have made MRI available to private practices. Reasonable access to a magnet is now available to most veterinarians and their equine patients. The technology is amazing and is based on the physics of the different water content of various tissues in the body. Here is a short explanation: Tissues in the body are made up of different amounts of water molecules. Each water molecule (H2O), has 2 hydrogen atoms, which has protons in the nucleus. When placed in the magnetic field of the MRI, these protons line up in the same direction, much like the needle on a compass. Short bursts of radio waves are then sent into the tissue causing the protons to go out of alignment. When the radio waves are turned off the protons re-align themselves again and in this process they emit radio waves of their own. These radio waves are detected and, using complex software, produce an image. Different tissues have different amounts of water and therefore produce different signals and rates of proton re-alignment, allowing visualization of those tissues and the ability to distinguish between different tissue types. With MRI we can see bone as well as every soft tissue type as if we were performing a dissection. Software can be used to manipulate the images to see tissue physiology, such as inflammation, bruising, etc, which is not possible with radiology or ultrasound.

The real strength of MRI in equine medicine is imaging the structures within the hoof capsule. Using MRI we are now able to diagnose injury to the smallest, most hidden ligaments within the hoof. With the correct diagnosis we can better target therapies and even avoid treatment mistakes such as performing a neurectomy when not appropriate. However, due to the obvious size limitations, we are only able to image the equine limb up to and including the carpus in the forelimb and the hock in the hind limb, although some magnets have an opening large enough to allow imaging of the stifle. We are also able to image the head and the most cranial parts of the neck.

Ask me about the MRI options available to us here in Wellington. 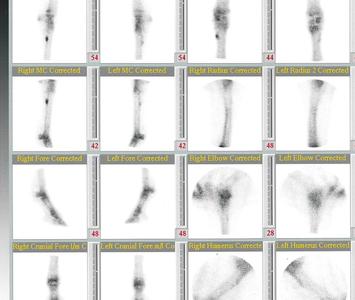 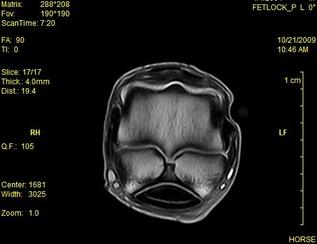 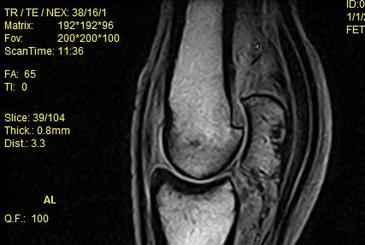 The radiation then stimulates a crystal inside a large detector/camera that in turn generates an electrical impulse. This impulse is sent to a computer that, using sophisticated software, converts these signals into an image of the bone. Although the image generated is not very “sharp”, it depicts the metabolic status of the bone tissue to a trained eye. Areas demonstrating an increased concentration of radioactivity are commonly referred to as “hot spots”.

Once an area of abnormally increased radiopharmaceutical uptake (IRU) is discovered, traditional imaging modalities such as radiographs are performed to determine the type of injury to the bone allowing a definitive diagnosis to be made. I quickly realized the value of scintigraphy and soon was performing 350+ scans a year, second in the U.S. only to those being performed at the New Bolton Center. My diagnostic abilities greatly expanded as I had to re-learn equine anatomy. In addition, I had to learn to differentiate between normal variations that can result in IRU and those indicating injury. This was extremely challenging since only a few veterinarians in the country were performing bone scans and, in many cases, we were learning as we went along. I must say that during those early years I developed the passion for advanced diagnostic imaging that is still with me today. To date, I have interpreted over 4,500 bone scans and continue to offer interpretation services.Type your paragraph here.